The meaning of membership, part 1: How it impacts us individually 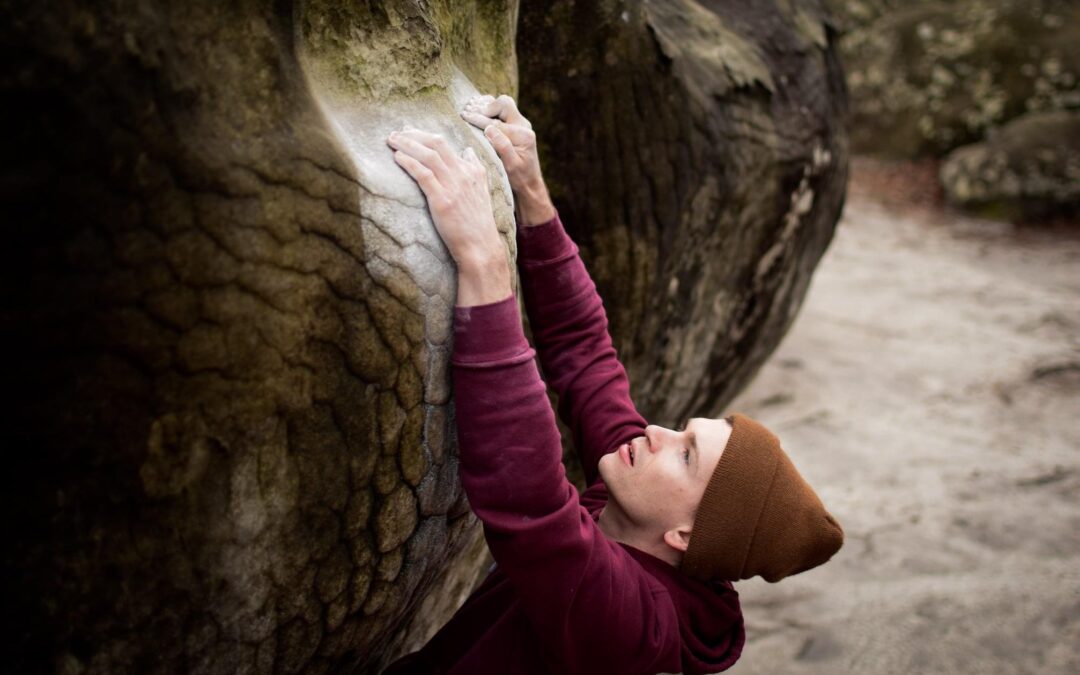 Year after year, the Southeastern Climbers Coalition works hard to prioritize land acquisition and stewardship, ensuring we can climb at boulder fields and crags now and in the future.

Accessing this land gives climbers abundant options in our region. Because of the work that donors and volunteers make possible, climbing spaces are acquired and protected.

But these spaces offer us even more than what’s on the surface, like spending time in nature and opportunities for camaraderie and friendship.

Last week, we shared five things you may not know about SCC membership. Today, we want to look at a few ways membership impacts climbers individually.

Markham Tuck, a long-time SCC member and climber, knows the benefits of SCC membership firsthand. Since his first days as a climber, he remembers the feeling of pride from being involved in the community.

“Shortly after being introduced to climbing by my buddy, Todd Clark, I went on my first climbing trip to the Red River Gorge. I hadn’t traveled much and was pretty intimidated,” he says, “but I fell in with a big crew of Alabama climbers there. Even though we were ‘far’ from home, there was a feeling of community every night by the campfire.”

Markham says it only took one trip outdoors to hook him. “Coming back from that trip, the spark was lit. The climbing community in Alabama at the time was small, but the passion felt immense. That’s when I started getting involved.”

Markham is the SCC representative for the Moss Rock Preserve boulder field in Birmingham, Alabama.

He says taking care of the climbing areas near his city makes him proud and has made him feel that way since the beginning of his climber days.

Like Markham’s sense of satisfaction and happiness in taking care of what he loves, there are several elements of being an SCC member that benefits us as individuals directly.

An opportunity to do what we love. As Markham’s experience shows, climbing offers us a chance to be involved in a community and grow friendships based on our unique commonality.

Plus, climbing is imperative for most of our individual health and wellness. Being an SCC member means we get to participate in our own well-being while giving back simultaneously.

And for added benefit, many health organizations like the Mayo Clinic and Harvard Medical School have published articles outlining the health benefits of service work. Being involved in service work helps our physical, mental, emotional, and spiritual well-being.

An opportunity to mentor the next generation. Markham says he was influenced very early on by a climber interested in preservation and investing in the SCC.

“Fast forward a lot of years: I still remember Paul Morley telling me, ‘Y’all are the future of climbing!’ on that trip to the Red. If you know Paul, you know he meant it.”

“To be honest, I have considered leaving the South over the years. I like to tell myself it means more to stick around and leave it better than I found it. Climbing is a hell of a lot bigger than when I started. Now I’m looking at the future generation and asking, ‘Y’all gonna leave it better than you found it?’

An opportunity to make a direct impact. As the sport of climbing grows due to its debut in the Olympics, popular movies, and the rise of climbing gyms across the country, it’s more important than ever to increase climber activism. For our region, SCC membership is the primary resource for concern, feedback, and future direction. It gives individuals a tactical way to ‘be the change’ they wish to see. Our last blog discussed why this season is a prime opportunity for individuals to get in on the ground floor of a very quickly growing organization. Now is the time to network, give, volunteer, and truly influence the direction of climbing in the southeast.

As Markham says, “Talk about it, be about it.”

After you sign up, there are several more ways to get involved with the SCC like participating in trail days or volunteering at fundraisers and events.