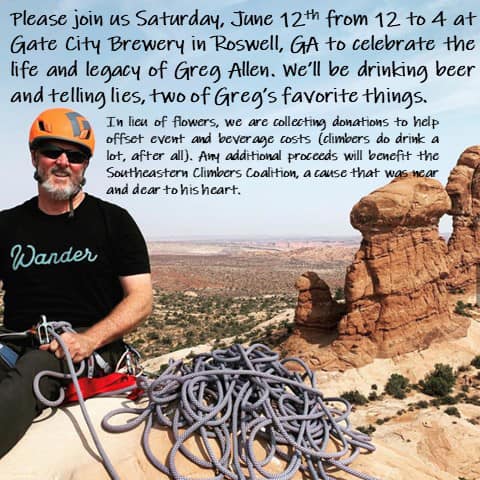 We are honored to share these memorial words written by Greg Allen’s closest friends and family.

On May 11, 2021 the Southeastern climbing community lost a patriarch and mentor to many, Gregory L’heuroux Allen. Greg was a prominent southern climber, activist, mountain biker and consummate beer enthusiast. Those who knew Greg grew to love his generosity, ready laugh, and ability to have point / counter point spirited conversation, so staying awake on long drives was never an issue. Climb at any Southern crag and it became readily apparent everyone knew Greg, his hearty laugh and smile contagious.

Greg volunteered countless hours for climber/conservation causes, and could always be found at trail days, fundraising events and competitions, supporting organizations such as the Atlanta Climbing Club, the American Alpine Club and the Southeastern Climbers Coalition.

Greg though from the start was different from the usual suspects of climbing partners…. he was wicked smart, really smart acing his way through Georgia Tech focused and goal oriented. Somehow between climbing trips he managed to nail down a mechanical engineering degree, and secure a girlfriend who eventually became Mrs. Jean Ulmer Allen.

A graduate of Georgia Tech, Greg was active in the Georgia Tech Outdoor Recreation Program (ORGT) which laid the foundation for a lifetime of rock and ice climbing and mountaineering. Greg was well travelled and climbed extensively in the West, in particular, Colorado’s front range.

Greg came of age in “The Golden Era” of southern traditional climbing, sharing pitches with Forrest Gardner, Chris Watford, Shannon Stegg, Bob Ordner and many others. Greg’s legacy is documented in a plethora of first ascents on both rock and ice. Greg’s mark on Southern climbing will live on.

Greg maintained a high level of fitness transitioning into a competitive road cyclist, and later an avid
mountain biker.

Perhaps what will be remembered most are his undeniable lust for life and enthusiasm for all things related to friends and family. A doting father and husband, Greg took these commitments seriously, and as anyone who spent time with him will attest, he would often brag about the pride he felt for his daughters Kirsten and Sean and his love for his wife, Jean.

In particular, Greg loved campfires, telling stories, laughing and sharing a beer with friends relishing the company of friends and family and the next day’s adventures. Greg’s presence at these gathering will be sorely missed.